Cthulhu for your iPhone

Cthulhu Phone Cozy
This was the inspiration for my next crochet project. (In the midst of a move, I need something small, portable, and really not that complicated.)

NOTA BENE: These comments are from the recipient regarding the fit (seeing as I don't personally have the iPhone to test it on).

It's a tight fit, height-wise. definitely usable, but you may want to add another row or two of height to the pocket.

I chained 26 13, then worked a single loop only around in a circle (that is, 25blo, 25flo 14blo, 14flo), on the next row I chained one at either end of the circle, making 28 around. For me, that's about 2.75 inches across the interior of the pocket. I'm going in circles with a stitch marker to hold my place, but I've only gone about 3 inches so far. Not quite sure what I'm going to do when I get to the head.
This shape looks to me as though it'll be perfect for something as thin and flat as the iPhone, although I don't have one myself to test it on. I imagine this 'recipe' can easily be adjusted for phones with slightly different dimensions, but should fit all models of iPhone if I get it right.

At 20 circular rows (4 inches) I then marked off a stitch at either end, and worked 13 across one side only. 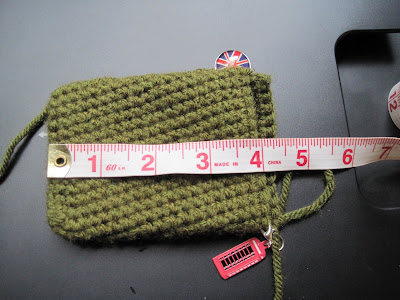 I'm continuing this one-side-only as a flap to go over the top of the phone, approximately 1 inch (for a total of 4.5 inches space for the phone).

The plan is for using buttons for eyes. Fancy eyes, like those in the original, have the possible downside of scratching the phone, so I want to avoid that, obviously! Googly eyes would look silly, so I think black button eyes are going to be the way to go. 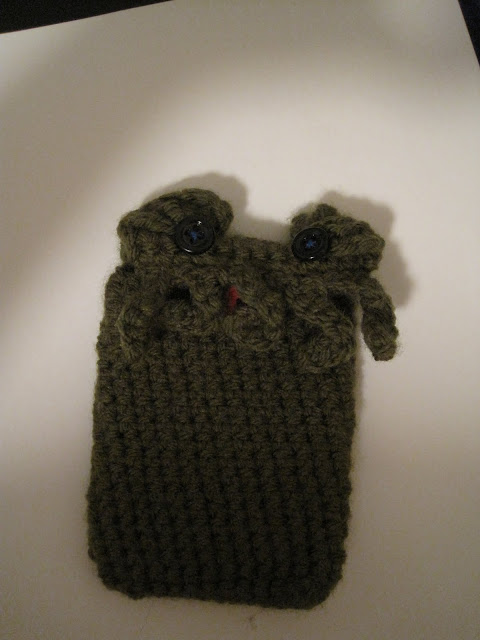 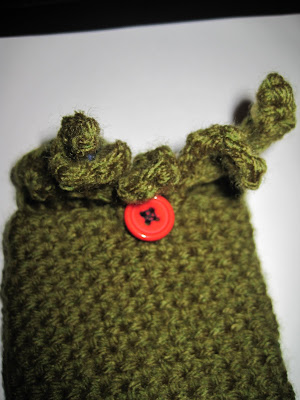 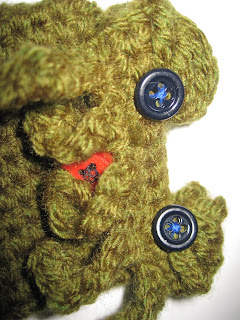 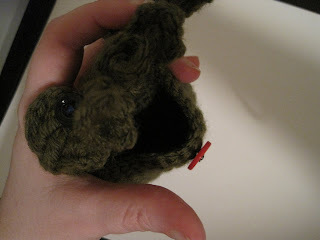 To work coils: do not bind off yarn from flap, but work back loop only (that is, the side that, when flipped over, will be the front of the cozy).
Chain 5, turn and make two sc in each of the 4 spots, this creates a coiling shape. Slip stitch into the next two stitches at the base, and start again. Repeat the coils until you've worked your way across the front, then bind off.

The reason we worked back loop only is to free up the other side of the stitches. In the middle of the "front" side, join new yarn with a slip, chain 3 (or as many/few as needed to fit around the button--my mouth button was larger than my eye buttons), and slip onto second stitch (that is, skip a front loop stitch) and bind off. Buttonhole, completed.

Sew button for "mouth" to the top/middle of the front, so that the buttonhole matches up.

To work eyes: Slip onto stitch near front/top of the flap enclosure (you don't want to acidentally put the eyes on the back of his head, but they need to have a bit of space above the mouthtenacles). The eye-shapes are triple crochet fans (5 triple stitches into one picked up crochet). Bind off and sew on ends.

You may notice that I didn't sew the eye buttons directly onto the fans, but almost directly on top of the stitch I picked up. This makes the eye fans look like ridges (in my opinion).

Next time, I might make the flap enclosure a little longer, it would give me a bit more wiggle room for the eye features.