This beanie is designed to look like a knitted beanie that my husband and I saw at Macy's -- only the one at Macy's was a bit small for his head.
What was nice about this beanie was that the lower part of it was about 2.5 inches of 3x3 ribbing before changing to 2x2 ribbing, which gave the hat a lot more visual interest than it would otherwise have had. I tried my best to duplicate the style while enlarging it, making it large enough to cover any head (while the ribbing makes it small enough even for me to wear). 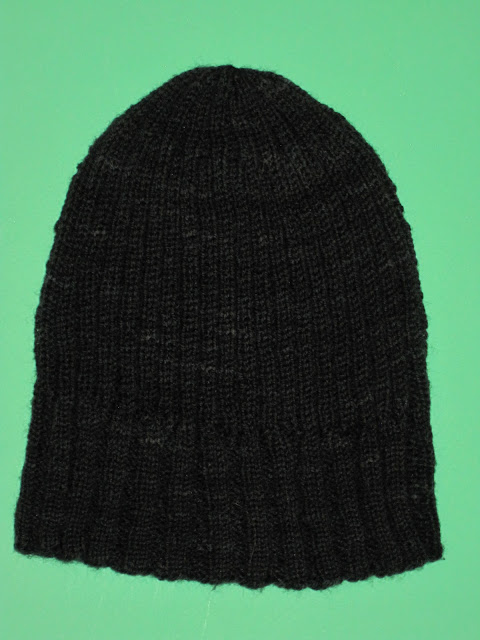 I used Dream in Color/Smooshy, though I could see using any fingering-weight yarn.
I used a circular size US1 needle. (I used the same circular needle the whole time, but feel free to switch to DPNs if you prefer, especially toward the end.)

Because I was mostly concerned about width (rather than height) of my stitches:
Given the nature of this design, exact gauge is not terribly important, it just needs to be fairly close. What was more important to me was to get a nice fabric -- dense without being too tight, so it was still flexible but not see-through.
Some notes on math and size
If you need to make size adjustments: It was important at cast-on for the hat to be an even-multiple of 3, that is, I used the formula 56x3 = 168. (Even-number multiplied by 3 so that the ribbing would work properly the whole way around.) It also needs to be an even multiple of 2 (168 = 84x2). This means your total number of stitches needs to be a multiple of both 2 and 3. So, if you wanted to size it down, you could go down to 156 stitches (52x3 and 78x2) but NOT 162 (which is 54x3 but is 81x2 because 81 is an odd number).
Pattern!
Cast on 168 stitches. I used the long-tail method because I prefer it and it does have some give to it, which was ideal for a hat.
Place a marker before joining; we're going to work in the round.
Rows 1-27: Work K3, P3 ribbing around.
Rows 28-62: Work K2, P2 ribbing around (35 rows).
Row 63: [K2, P2, K2, P2tog] around.

Row 88: K2, P2tog around to last stitch, then M1 purlwise to complete the round. (This is to ensure the correct number of stitches needed for the next rounds.)

Cut yarn, feed it through the remaining live stitches and pull tightly/secure thread/weave in ends. Voila, you're done!
Posted by Jen A. Crochet at 1:19 PM No comments: