Flowers after the frost, part II

Sunday, April 3:
I'm working on this project again, this time in KnitPicks' CotLin yarn, DK weight. This yarn, being a cotton-linen blend, is good for my friend in Florida (for whom I'm making the piece) but offers some interesting differences. The wool yarn blocked out solidly but still had stretch after it was dry.
On the other hand, the CotLin (a blend of cotton and linen) is a bit firmer, less what I'd call "sproingy". Where my arm measures about 16 inches around, my friend's arm is more like 11 inches, though she did caution me that she'd prefer room since she can fluctuate. That's fine!
The stitch definition I'm getting with this yarn without blocking it is beautiful (I've used it before but for cabling, not for fine lace work). I suspect this one will be roughly the same number of repeats/size since it is less forgivingly stretchy than the wool but I'll be updating this as it goes. 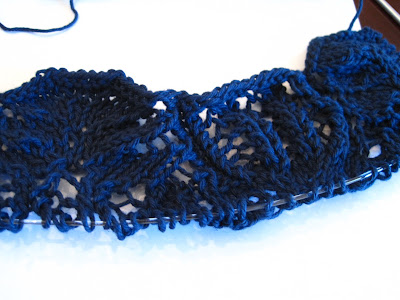 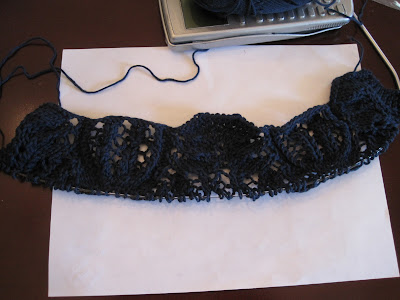 Going along fairly smoothly; I found a typo in my pattern (typo = missed transcription of a K2 when I was typing it up), which is good that I caught before anybody else tried to do it and came up 4 stitches short on that row and had much hair-pulling when they tried to figure out the problem. However, that one hiccup overcome, it's been moving along though it'll be slower during the work week. If I'm lucky, I'll finish in a couple days. I'm noticing it seems a little more open than it did with the wool yarn, despite their being theoretically both DK weight, but I think that'll be ok for Florida so no problem there.

Tuesday:
It's been a busy couple of days, but I'll finish the lace portion of the body tomorrow. I wonder if I can finish the lace, do the arms, and collar all in one evening. Not that there's a particular rush, but I'd like to see it done and off to the intended recipient. So far nothing new to report regarding the yarn, and I won't be doing a contrast color for the collar it'll just be the same blue. Also: cotton, so no need to pre-block the lace (else I'd do it tonight -- who am I kidding!).
The main thing is that I'm deciding whether to end after 6 pattern repeats (that is, 3 of the first four rows, 3 of the last four rows) or if I should add in one more for good measure. I don't want it to end up too saggy too fast! But I also don't want it to arrive and be uncomfortably tight.

Wednesday:
Measurements. I've decided to go with a grand total of 72 pattern rows and I've finished off the all-knit row but, as noted, I've left my stitches live on the bottom and I'll be slipping them to a holder while I work the arms.
Since I've got more wiggle room in this one, I'm going to make the arms circular to begin with, which will save me seaming them later but may cause other, unforeseen problems. In the meantime, I took measurements of the piece, unstretched (first) and stretched in each direction. 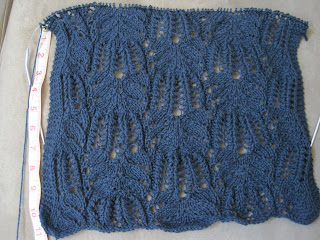 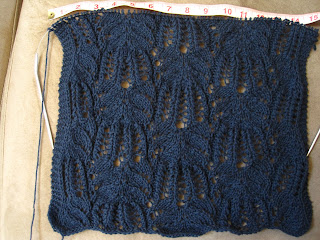 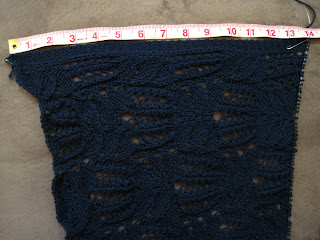 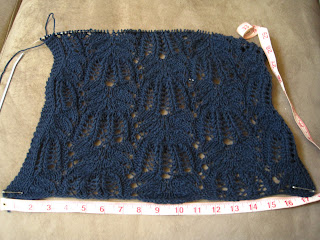 Thursday:
I've finished the shrug, the numbers for the collar/ribbing are all exactly the same and it came awfully close to using a whole two skeins of the CotLin (good thing I had them both!)
But on the plus side, it looks lovely! 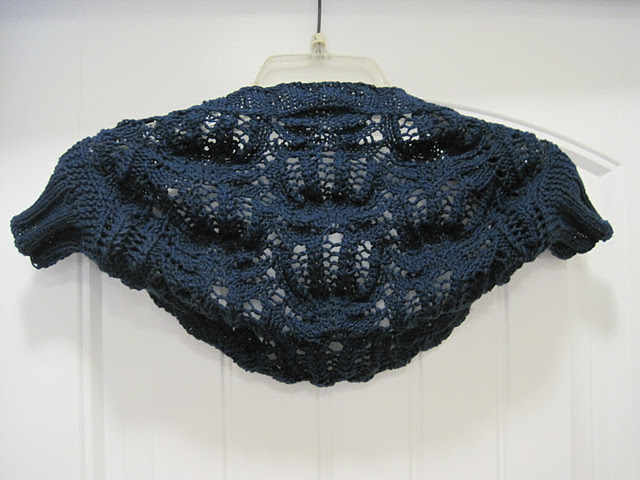 I'm really pleased with it and I hope the intended recipient likes it as well.
Posted by Jen A. Crochet at 9:22 AM 2 comments: